June 2014:  My husband, Gene, and I wanted to research the Campbell so we planned a trip to NARA, which is the best repository of Navy ship records, muster rolls, deck logs, photographs, and documentary films.  We got up before dawn to allow four hours driving from Hampton, VA to College Park, MD.  We had to be at NARA in time for the first pull of documents.   If we missed the 9 AM , the next one wasn’t until 1 PM.

We arrived @ 8:15 and were directed to place our things in a locker.  We could keep our cell phones, laptops, and flatbed scanner.  I applied for my research card and sat through an online orientation about the proper way to handle materials in the research rooms.

Although my photo expression says “I’m tired,” it was a very exciting day.

Honestly, I didn’t know whether our trip would be for naught if the Campbell’s deck logs had been lost.  Their presence in the research facility depended on an intricate chain of events. During the War, bags of mail, supplies, movie reels, and records were handed from ship to ship and sent back to Washington, DC.  The naval documents had to then reach the Bureau of Naval Personnel  each month.  Hopefully, no one stole them.  The current rules for handling documents came from people’s stealing or marking up original documents.

We filled out the request form at the research desk around 8:45  and waited.  It was excruciating.  When the NARA staff member wheeled in the cart full of documents I had high hopes my Campbell deck logs were there.

Voila, success.  It was hard to contain my enthusiasm. I spent half the day skimming over 2,600 deck log entries.  These gave a 24/7 account of where the ship went, what happened, and any problems they encountered.

Many of the crew were  18-21 years old, and the logs included disciplinary actions taken against them.  Infractions ranged from returning to the ship five minutes late to one sailor’s being drunk and using abusive language.

It was an emotional experience holding the original pages my father had signed with his fountain pen.  I’d recognize his signature anywhere.

The pages were in good shape:   six entries per day, in four-hour blocks, typewritten by the yeoman.   The Campbell often had to travel in a zig zag pattern to avoid detection by the enemy.   I imagined how difficult it was to type accurately when the ship was rocking and rolling.

The language of the deck logs was factual and under-stated.  Of note,  August 15, 1945, was one of the most momentous days in the WW II Pacific theater.  The Japanese surrendered on that day, and the log reported  “ceasing all offensive action against the Japanese Empire with instructions to take all wartime precautions for self defense.”  This directive had arrived via radio dispatch. 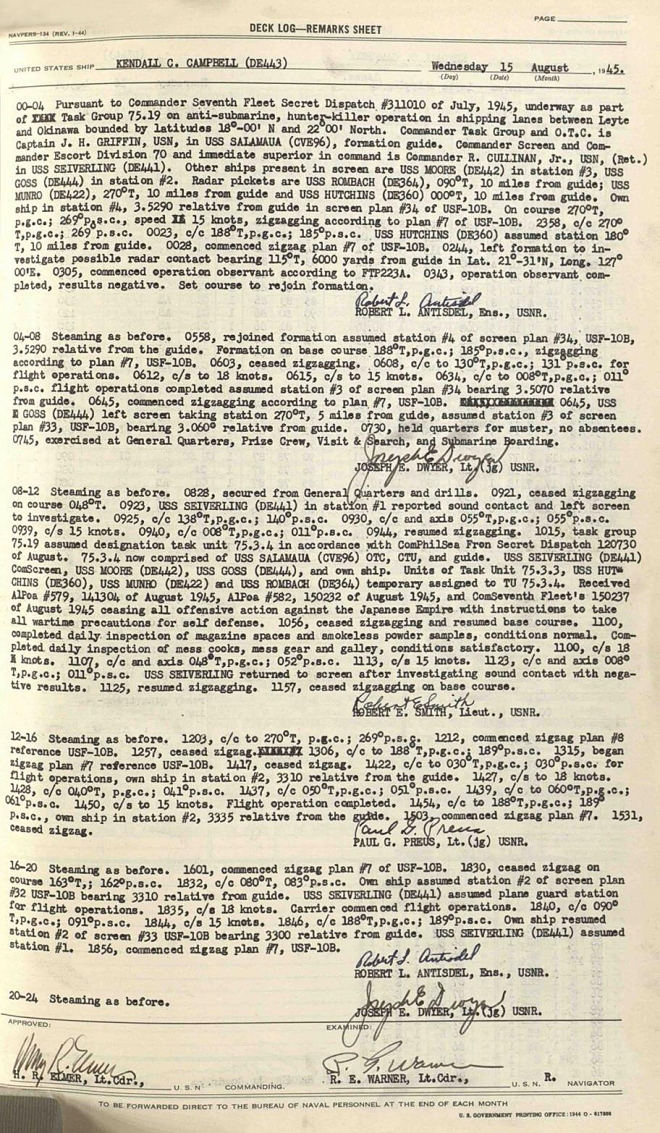 On a lighter note, my father was the movie officer, and I was curious what type of movies he showed. I wondered if the crew got to watch popular films like National Velvet with Elizabeth Taylor and Mickey Rooney or To Have and Have Not with Humphrey Bogart and Lauren Bacall. Several war dramas were released in 1944:  The Fighting Sullivans and Thirty Seconds Over Tokyo.  I was disappointed they didn’t report the names of films shown onboard.

Security was tight at NARA, and we were scrutinized each time we left one room and entered another.  While we tried to follow the rules to the letter, we managed to get into trouble twice.  Unwittingly,  I  removed two folders from the  case on my desk at the same time.  The staff were quick to remind me to only have one folder out lest I return the folder to the wrong place.  Another instance, I talked to Gene who was across the railing in a different section.  He was copying documents on the copy machine.  No talking was allowed over the fence.

NARA houses a large collection of naval photos on the top floor. We couldn’t touch them without wearing white cotton gloves supplied by the facility.  They had a few photos of the Campbell, but I had already seen them.

In our experience, the research staff were very friendly, knowledgeable, and professional.  They seemed relieved that I knew the names of my father’s  ships and their dates of services.  They could easily focus on the information I needed.

We need to plan another road trip to the NARA.  Tim Rizutto, Executive Director, at the USS Slater Museum recommended we search for “Campbell’s action reports.” They have detailed information about the awards my father’s ship received. I’d also like to look through the black and white film clips of ships in the South Pacific.  The documentaries are not very well indexed yet, but perhaps I can find some footage of my father’s ship.